Can Tho of Vietnam, with a total area of 1,439 km2, is the largest province-level municipality in the Mekong Delta – a region in the southwest of Vietnam where the Mekong River approaches and empties into the sea through a network of distributaries. With around 1.2 million people resided within Can Tho, the city acts as the central and driving force behind the development of Mekong Delta region through rapid urbanisation and high investment in infrastructure. The climate in the region is characterised by a high and relatively stable temperature, consisting of rainy and dry season throughout the year.

As the result of climate change, Can Tho City has been dealing with two major disastrous climate issues annually, which are floods in rainy seasons, due to water excess and high tides; as well as drought and salinity intrusion in dry seasons due to surface water scarcity. In recent years, these challenges have become more and more unpredictable compared to the observed patterns in the previous years. 2016 has set the new record for an unprecedented drought and salinity intrusion in Can Tho’s history, while a matching disaster has also recently occurred in the early months of 2020. All these have seriously affected the socio-economic development in the region as most of the households still make use of the river for domestic water supply, agricultural production, and many more. In addition, the phenomenon of riverbank subsidence and erosion in Can Tho and Mekong River Delta region have also worsened from time to time. On top of these climatic occurrences, the unsustainable use of water resources of the upstream Mekong countries, the linear economy model, along with limited infrastructure and resources also hinder the development of Can Tho’s strategy to build resilience and respond sustainably to climate change.

Recognising the uphill battle early on, Can Tho City has determined that climate adaptation and mitigation actions are on top of their priority list. On 6 February 2012, Can Tho City Commission has issued Resolution No. 07-NQ/T 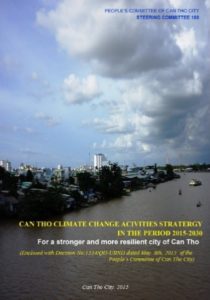 U that thoroughly directs the management of natural resources, environmental protection and climate change responses. This is then implemented in various policies, namely the ones within Can Tho’s Climate Change Activities Strategy in the Period of 2015 – 2030: “For a Stronger and More Resilient City of Can Tho.” The plan is a joint effort of the local communities, government at all levels, various departments of the city, as well as local and international consultants, institutes, schools, agencies, and organisations. The ultimate goal of this plan is to protect Can Tho City from future climate threats and to guarantee the development of a green and sustainable economy in the region. Slowly but sure, Can Tho is building its climate adaptive capacity through industry development that heavily considers environmental protection and climate change response, urban upgrading programmes and projects, along with green transport infrastructure and embankment systems.

Can Tho also exhibits its commitment to enhance its climate resilience through the establishment of the Steering Committee for Climate Change Response and the Climate Change Coordination Office. Its function is to promote cooperation with international organisations to implement numerous support programmes on climate adaptation and mitigation from donors and international projects. For instance, Can Tho was part of 100 Resilient Cities (100RC), pioneered by The Rockefeller Foundation to help cities build resilience to the physical, social, and economic challenges that are a growing part of the 21st century. These remarkable long-term commitments that Can Tho has demonstrated ultimately is recognised internationally as Can Tho City was awarded the ASEAN Certificate of a potential city to become environmentally sustainable city in regarding to clean air for the third time at the 14th ASEAN Environment Ministers Meeting on 12 September 2017. “These are the driving forces that motivate the city to make more efforts to become the model cities of ASEAN in keeping a green and clean environment and continue to develop into the economic center in the region,” as stated by Can Tho’s Department of Natural Resources and Environment (DONRE).

Can Tho signed its commitment with GCoM on 18 February 2019. Can Tho City realises that it is necessary and important to be part of the global alliance, especially in the current period when the city is in the process of implementing the Climate Change Activities Strategy, the Paris Agreement on GHG emission reduction and the Government’s Resolution No. 120/NQ-CP on sustainable development of the Mekong River Delta in terms of climate change adaptation. Accordingly, the city authorities will implement policies and measures to reduce greenhouse gas emissions, raise the city’s adaptive capacity and increase access to sustainable energy. To build capacity for the city to implement reports in accordance with GCoM’s Common Reporting Framework (CRF), IUC Asia and UN Habitat have been organising training sessions and supporting Can Tho city to develop local Climate Action Plan.

Can Tho’s local climate initiatives cover various sectors’ issues; from raising awareness to enhance knowledge about green growth, GHG emissions mitigation, and the use of clean and recycled energy, promoting sustainable consumption lifestyle, to integrating national climate strategy and green growth indicators into existing local development plans. Pilot models towards urban green and economy become more and more diversified. In particular, the promotion of the economical and efficient energy use programme has contributed to enhance awareness and actions in school buildings, public facilities’ lighting, and roof solar energy. In terms of tourism, Can Tho also enhanced Mekong green tourism villages by developing green infrastructure model in communities along with high-tech agricultural model. In promoting agricultural production that integrates climate change adaptation and environmental protection, Can Tho has also implemented a number of solutions, namely by deploying the project “Restructuring the agricultural sector of increasing added value and sustainable development,” linking urban agriculture with tourism that involves fruit gardens; applying best practices in livestock and aquaculture; and increasing the application of biotechnology towards sustainability, environmental friendliness and climate change adaptation.

In the future, Can Tho hopes to foster more international cooperation that focuses on enhancing the capacity of Can Tho’s city officials, especially in the field of environment and climate actions. This includes organising conferences, workshops that aim to introduce solutions and new technology in environmental protection and climate change, especially in the field of water resource control and the protection of vulnerable communities. The city also looks forward to collaborations on the implementation of climate mitigation to conduct green growth and sustainable development, particularly the ones that actively involve the communities. Can Tho now is prioritising to accomplish its GHG Inventory in order to further develop and implement its Climate Action Plan.