14 October 2021 |The GCoM SEA Secretariat successfully participated in the EU-Indonesia Climate Diplomacy Week by organising the “ Local Authorities as Climate Champions” event. The virtual event is part of the annual EU Climate Week that brought forward the theme “Ambition and Action.” 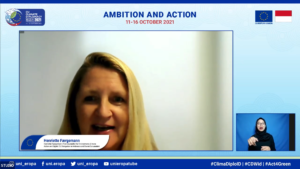 In her opening remarks, Henriette Faergemann, First Counsellor – Environment, Climate Action, and ICT at the EU Delegation for Indonesia said, “Local authorities are climate champions because they are at the level of governance at the closest to the citizens and, thus, have excellent opportunities to lead climate actions that will impact national climate actions plan.”

She also stated that in Indonesia, the EU is working on three different programmes to support climate actions in cities: Climate Resilient and Inclusive Cities (CRIC) carried out by UCLG ASPAC, the International Urban and Regional Cooperation (IURC), and Global Covenant of Mayors (GCoM) Asia. The GCoM Asia Project focuses on the engagement and training of cities in Southeast Asia to develop the Climate Action Plans (CAPs). UCLG ASPAC has been the host of the GCoM SEA Secretariat since 2018. 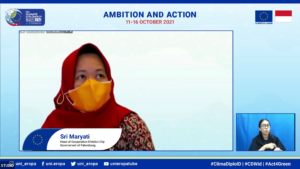 Palembang was represented by the city’s Head of Cooperation Division of Palembang Sri Maryati. She mentioned that according to the Greenhouse Gas (GHG) inventory the city conducted, there are 21 sources of GHG emissions, with settlements contributing the most (22 per cent of total emission).

Palembang has committed to reducing its GHG emission to 15 per cent by 2030 and 9 per cent by 2023. This commitment is implemented through campaigning for electricity efficiency, introducing renewable energy conversion, socialising 3R of waste management, building city parks, and developing sustainable transportation. 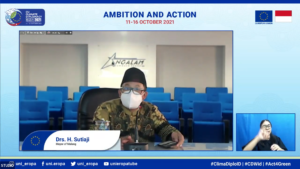 Good practice of Malang was presented by Mayor Sutiaji. He showcased both mitigation and adaptation actions, including increasing the quality and quantity of open green spaces, developing urban farming, building infiltration wells, and introducing the Climate Village (Kampung Iklim) programme.

“Our paradigm on waste management has shifted to integrated management from upstream (source of waste) to downstream (final processing),” said the Mayor. He also emphasised Malang’s commitment to reduce the amount of household waste to 30 per cent by 2025.

The case of each city demonstrates local leadership and commitment to sparking climate action. The participation of speakers from three key ministries in Indonesia, namely the Ministry of Environment and Forestry (MoEF), Ministry of Home Affairs (MoHA), and National Development Planning Agency (Bappenas), showed that the national government supports city climate actions through tools, capacity building, and policy. 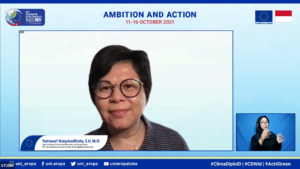 Ratnasari Wargahadibrata of MoEF said, “The MoEF has arranged semi-decentralised system using both top-down and bottom-up approaches. With this, coordination between national and local governments is needed, particularly considering the reporting will need more detailed data.” She also stated that the ministry has a SIGN SMART to help cities and local governments calculate and report their GHG emissions and National Registry System to collect data and information on completed mitigation action. 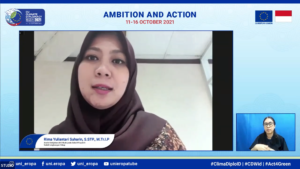 Rima Yuliantari Suharin of MoHA emphasised the importance of multi-stakeholder partnership. “In achieving the SDGs indicators, local governments need to look at local conditions, potentials, and characteristics, as well as role-sharing between national and local governments and non-governmental organisations, such as universities, philanthropy institutions, and NGOs,” she added. 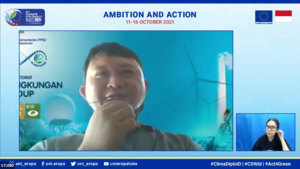 Irfan Darliazi Yananto of Bappenas also emphasised the enabling environment provided by the national government. He stated that a Low-Carbon and Climate-Resilient Development has been integrated into the 2020-2024 National Mid-term Development Plan. This Development minimises the trade-off between economic development and environmental preservation.

The Secretary-General of the United Cities and Local Governments (UCLG ASPAC) Dr. Bernadia Irawati Tjandradewi delivered her closing remarks echoing the importance of cross-sectoral collaboration. “It is vital to have an enabling environment – through policies and regulation and integrated reporting mechanism – to support cities and local governments in integrating its climate resilience issue in the planning documents such as Regional Mid-term Development Planning. We need to collaborate, innovate and work collectively to tackle the climate crisis,” she said.

We would like to thank all speakers and participants for joining the EU Diplomacy Week. More than 40 have joined the virtual event on “Local Authorities as Climate Champions.” 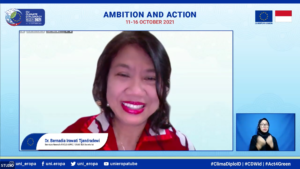