The Secretariat of the Global Covenant of Mayors for Climate and Energy Southeast Asia (GCoM SEA) hosted by UCLG ASPAC, facilitated a visit from European Union-funded GCoM Asia Project to 4 pilot cities in Indonesia, namely Tangerang City, North Minahasa Regency, Medan City, and Pontianak City. The visit to each pilot city was the first physical meeting after the official announcement of GCoM Asia selected pilot cities in Indonesia earlier this month. 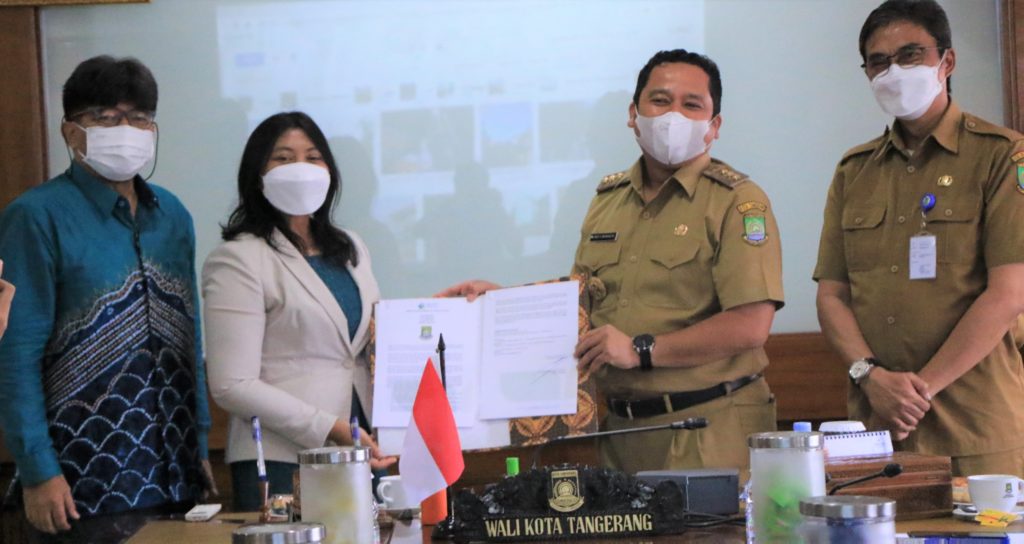 Being closest to the Jakarta Capital City, Tangerang City was the first to be visited by the GCoM Asia Project team on Tuesday, 14 December 2021. The team was welcomed by Mayor Arief R. Wismansyah at the Tangerang City Central Government Office. The Mayor highlighted some climate-related problems faced by the City, including frequent flooding, lack of open green space, highly-populated settlements, and disintegrated modes of transportation. Realising those challenges, Tangerang City Government has undertaken some initiatives, such as Kampung Iklim, Adiwiyata, Kecamatan Menanam, Kampung Terang, and Bus Tangerang Ayo (Tayo).

Out of 4 pilot cities/regencies, Tangerang is the only city that has become the GCoM signatory by signing a commitment letter back in 2019. However, on this occasion, the Mayor officially signed the renewed GCoM Commitment Letters to emphasise the City’s commitment to meet and exceed the Paris Agreement objectives. In front of the Heads of the City’s Departments and Offices, the Mayor said that Tangerang City Government would be ready to facilitate the GCoM Asia Project team and asked for the team’s full support for his City.

The City’s Climate Change Working Group is developing and will start working with the GCoM team next year. The Mayor also hopes that the GCoM Asia Project can support Tangerang City in solving its climate problems and, at the same time, implementing the Climate Action Plan (CAP). Responding to that, the GCoM Asia Team Leader said that although the GCoM Asia Project’s main output is the CAP of Tangerang City, the Project will also facilitate the City in funding its innovative climate actions in the future. 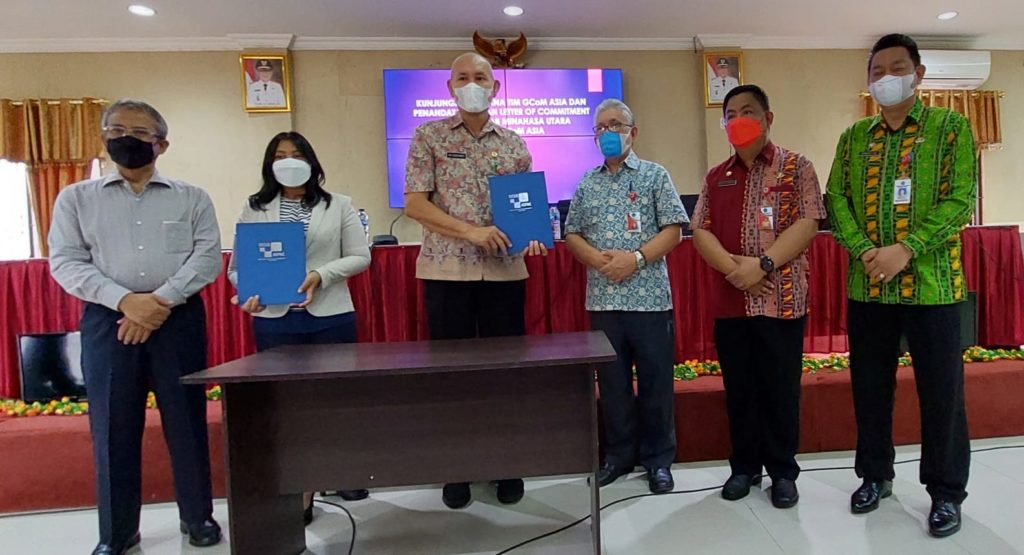 Representing the middle and east part of Indonesia is the North Minahasa Regency of North Sulawesi Province. The Regent of North Minahasa, Mr. Joune James Esau Ganda expressed his gratitude for North Minahasa being the only regency or kabupaten chosen to be the pilot of the GCoM Asia Project. “For this reason, North Minahasa Regency will implement policies and take concrete steps to reduce and limit GHG emissions, prepare for the impacts of climate change, increase access to sustainable energy, and follow developments in achieving these goals,” he added.

Project Manager of the Foreign Policy Instrument of the European Delegation in Indonesia, Seth van Doorn, also attended the meeting via Zoom. He congratulated and welcomed North Minahasa Regency to the GCoM network, with 84 signatories in Southeast Asia and more than 11,000 signatories worldwide. Van Doorn also emphasised that the GCoM Asia Project is here to support the cities and regencies in Indonesia to achieve a Nationally-Determined Contribution (NDC) in reducing GHG emissions by 21 per cent unconditionally and 49 per cent conditionally.

Although the Regent’s Decree of Climate Change Working Group (WG) is still being developed and will only come into force next year, the members of the WG were present at the meeting to further discuss the work plan GCoM Asia Project implementation in North Minahasa. The Executive Director of CCROM SEAP, Prof. Rizaldi Boer, appreciated the active involvement of the WG that comprises academicians and representatives from non-governmental organisations. In 2022, CCROM SEAP will provide a series of capacity-building events in climate adaptation and mitigation for the WG members. By the end of the year, it is expected that North Minahasa will have its Climate Action Plan ready and have identified its innovative climate action to be financed. 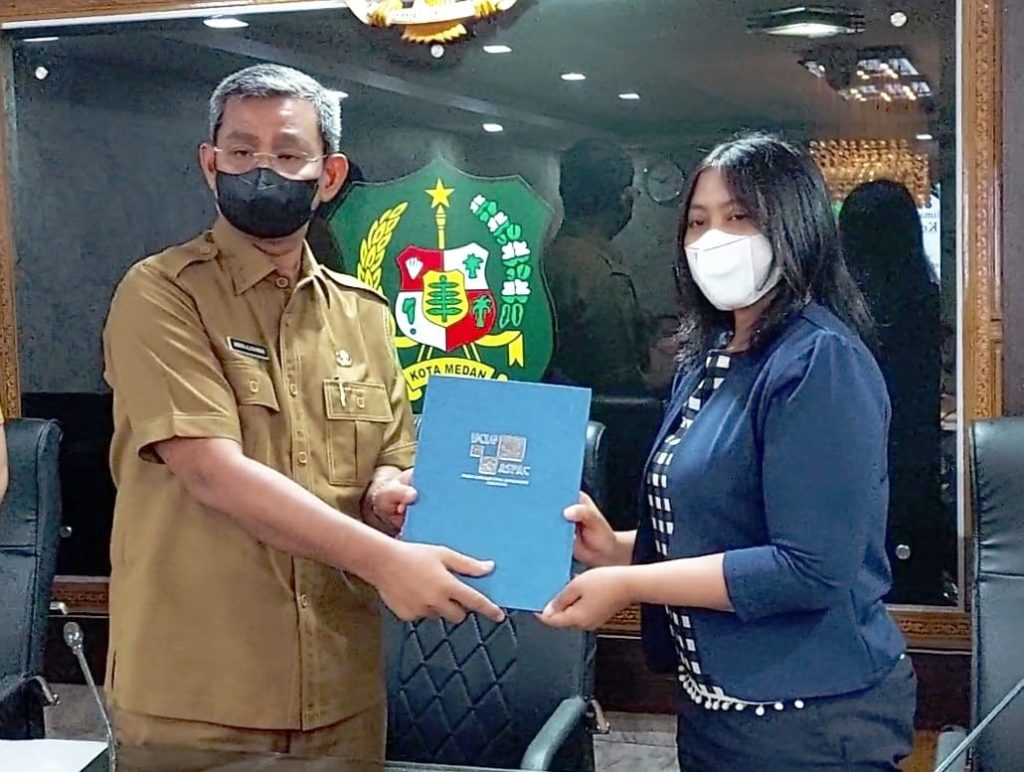 On Monday, 20 December 2021, the team visited Medan City of North Sumatra Province. The Regional Secretary, Mr. Wiriya Alrahman, gave welcoming remarks on behalf of Mayor Muhammad Bobby Afif Nasution, who has previously signed the GCoM Commitment Letter. Mr. Wiriya mentioned that Medan City’s commitment to the environmental issues is manifested in the revised Medium-term Development Plan (RPJMD) and expressed his gratitude for being chosen as one of 4 pilot cities of the GCoM Asia Project.

Head of the Built Environment and Spatial Planning Division of the Local Board of Development Planning of Medan City, Mr. Willy Irawan, presented the climate-related issues faced by the City and the solutions the City has undertaken. Mr. Willy also mentioned that through “Medan Membangun,” the City aims to build facilities and infrastructure and consider environmental issues at the same time. It is manifested in the Strategic Plan of the Department of Environment, in which Medan City is committed to adopting Indonesia’s NDC in reducing GHG emissions by 29 per cent unconditionally. By becoming the GCoM signatory as well as the pilot city of the GCoM Asia Project, Medan City is advancing its steps toward a green and sustainable city. 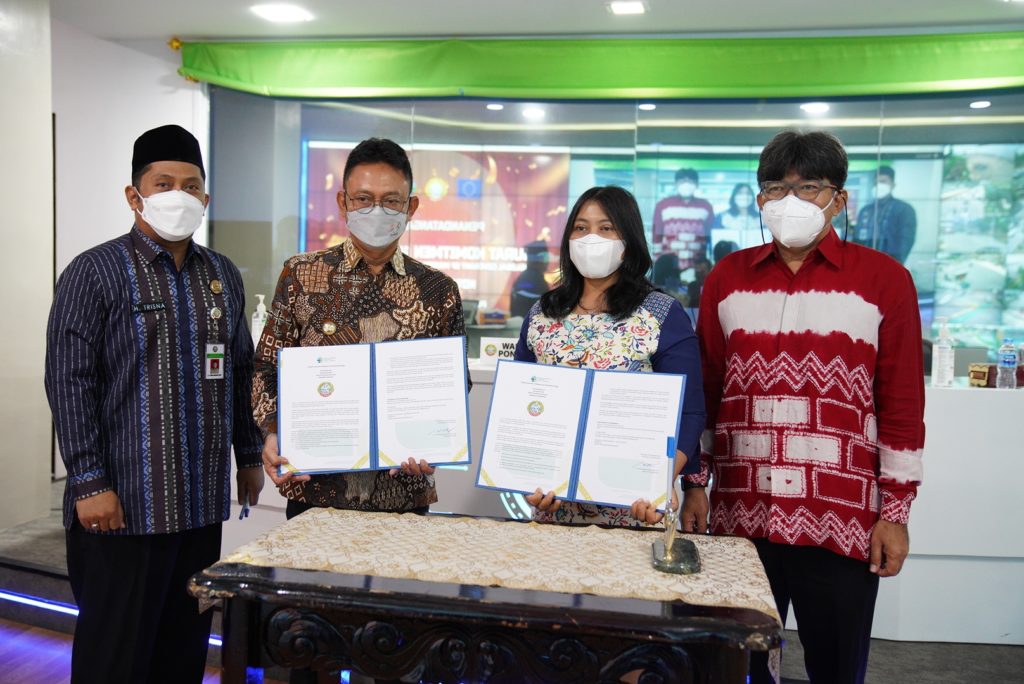 Having visited Java, Sulawesi, and Sumatra islands, the GCoM Asia Project team concluded their visit to the Pontianak City of West Kalimantan Province. Mayor Edi Rusdi Kamtono, along with the Heads of Departments and Offices of Medan City Government, welcomed the team in the Pontive Center. On this special occasion, after delivering a presentation on Pontianak City’s climate condition, challenges, and initiatives, the Mayor signed GCoM Commitment Letter to emphasise further the City’s pledge to climate actions.

The meeting proceeded to a technical discussion with the Climate Change WG moderated by the Head of Development Planning Agency, Mr. Trisna. Pontianak City is the only pilot city that has a WG established before the visit of the GCoM Asia Project team. The WG comprises not only government institutions but also universities, private sectors, non-governmental organisations, and media, which is a Pentahelix in practice.

As the WG has been established, it was so much easier to discuss the timeframe and work plan of the GCoM Asia Project for Pontianak City. The series of capacity-building activities for Pontianak City is scheduled to be conducted in January 2022 for the first session, March 2022 for the second, and June 2022 for the third. The Climate Action Plan (CAP) is planned to be finished at the beginning of September 2022.

Before being selected as pilot cities/regencies, the four local governments had to undertake a series of processes, from filling out a questionnaire until attending a validation meeting. The four local governments were chosen based on 5 criteria: human resources, joint-financial capacity, geographical diversity, capability to engage multi-stakeholders, availability of existing climate initiatives, and strong commitment from the mayor. In the selection process, the GCoM SEA Secretariat also engaged the Ministry of Environment and Forestry of Indonesia (MOEF/KLHK), the Association of Indonesian Municipalities (AIM), and the Centre for Climate Risk and Opportunity Management in Southeast Asia Pacific (CCROM SEAP) of IPB University.