With a population of 190,529 people covering an area of 144.61 square kilometres, Hang Tuah Jaya is a newly developed municipality that acts as the state capital out of four local councils in Malacca, Malaysia. Established in 2010, the municipality is located in the northern portion of Central Malacca District, adjacent to Malacca City, as well as some areas of Alor Gajah and Jasin regions. Other than a number of small hills, the state of Malacca is generally a lowland area with average elevation below 50 meters above sea level as well as hot and humid weather throughout the year. It contends with an increased risk of rainfall flooding as the result of inadequate drainage facilities and rising high tides.

Joining Global Covenant of Mayors for Climate and Energy Southeast Asia in the early 2020, Hang Tuah Jaya has been enacting a comprehensive and ambitious climate strategy since 2012. Tackling climate change is a priority for the city, which has set ambitious short and long-term emissions reduction targets since its establishment. As stated by the President of Hang Tuah Jaya Municipal Council (HTJMC), Shadan Othman, “We committed to reduce 665,000 tCO2e  by 2030 relatively to the BAU scenario; to achieve the level of 0.072 intensity Carbon per GDP (reduction of 45%) to support national vision and commitment.” Hang Tuah Jaya also committed to support the national vision on carbon reduction by 2030 and has put the highest priority for the implementation of SDG 2030 at the local level.

Hang Tuah Jaya’s climate accomplishment has set the precedent for municipalities and cities in all Malaysian states. Hang Tuah Jaya pioneered the development of green city (low carbon city) through the implementation of Malaysian federal government initiative called Low Carbon Cities Framework (LCCF) in 2012, supporting Malaysia’s Vision 2020 to be a high-income low carbon developed nation with a minimum GDP Per Capita of USD15,000 by the year 2020.

Specifically, the municipality was awarded the first-ever Diamond rating for local council under the LCCF and Assessment System initiative established by the Energy, Green Technology and Water Ministry and Malaysian Green Technology Corporation (GreenTech Malaysia). This accomplishment is due to Hang Tuah Jaya’s success in effectively reducing its carbon footprint amounting to 434.26 tonnes of CO2 (4-3% carbon emission reduction) in 2014 within two areas: urban environment sector and buildings. Hang Tuah Jaya understands that the awareness programmes and green practices within the organisation are crucial to encourage energy conservation from the usage of electricity, water, and other resources.

Not stopping there, Hang Tuah Jaya received another achievement: Diamond Recognition Award 2019 at the Low Carbon Cities Challenge 2030 for its success in reducing the GHG emission by 9.21% from 2013 to 2018 which is equivalent to 1,685.39 tonnes CO2 mission. From these achievements, Hang Tuah Jaya highlighted the importance of several climate actions which ensure the measurability and clarity in designing effective climate action plans. For example, Hang Tuah Jaya has successfully collected the data of its carbon emission since 2012 that is pivotal to identify potential mitigation projects. Hang Tuah Jaya has also conducted a comprehensive Greenhouse Gas Inventory in 2018, a form of expansion from LCCF, which resulted in an overall data shown below. 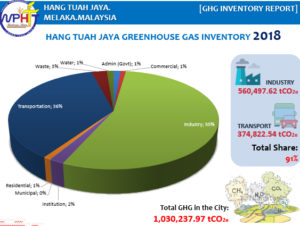 According to Hang Tuah Jaya’s 2018 GHG emission report, industry accounts for 55%, and transportation contributes 36%. The industrial sector primarily comes from emissions associated with the electricity that industrial operations consume. From these specific insights, Hang Tuah Jaya then was able to plan for well-targeted mitigation projects that would significantly reduce the amount of carbon emissions.

Down the road, Hang Tuah Jaya sets a long-term strategy called Hang Tuah Jaya 2030 to fulfill its ambitious vision. This programme aims at set achieving several targets such as: (i) carbon reduction in the city; (ii) implementation of SDGs 2030 at local level; (iii) status of Low Carbon City by 2030; and others. Hopefully, in the next 10 years Hang Tuah Jaya would be able to decrease GHG emissions and carbon intensity (per GDP and per capita) as illustrated in the graphic below. 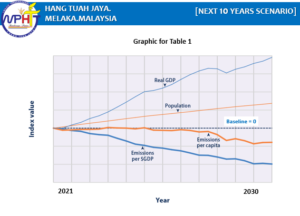 HTJMC viewed GCoM as a learning opportunity to further strengthen its commitment to promote climate change adaptation and building resilience. HTJMC expressed that the city’s involvement in GCoM will reinforce its effort in setting examples for other cities on climate actions and enable HTJMC’s goal to become a champion in the development of cities’ climate action plans. Hand in hand, UCLG ASPAC, as the GCoM Southeast Asia’s Secretariat, assists Hang Tuah Jaya to further develop its Climate Action Plan, namely by assisting the city to develop a concept note for the Gap Fund submission.